Where has Brian been?

Previous Next
Where has Brian been? 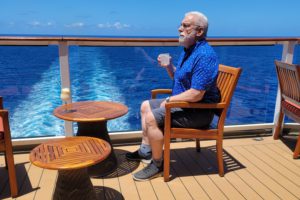 Many of you have emailed or called during the last few months and asked what happened to Brian? Where is he?

It’s been quite a while since my last article. But I’m glad to be back writing again. In case you wondered what happened, well it has been a lot of things.

First, in September I had surgery where my my L1 – S1 vertebrae were fused with 8 long screws and 4 rods. I’m still recovering from that surgery.

Then in November we took a two-week vacation and cruise, with 4 days in Rome followed by a 9 night Azamara cruise, and then 4 days in Lisbon.

The weekend after our return to the US we put our Phoenix home on the market and it sold in one day. However, we had a long escrow because we had tenants in our St Pete, Florida home until February 28th.

So December and January were spent packing up our Phoenix home and making all the arrangements for moving – hiring United Van Lines to move us, finding a carrier to ship our car, setting up utilities in St Pete and canceling them in Phoenix, while still doing physical therapy.

Finally February 26th came and we flew out of Phoenix to our new home in St Petersburg, but our furniture didn’t arrive until March 5th, so several more nights in a hotel.

We have about 80% of the boxes unpacked, but still lots more to go. As fate would have it, we had planned a 12-night cruise starting the beginning of April years ago. By the time it was time for this vacation we were so tired of unpacking, making arrangements for a new roof, ordering all new hurricane resistant doors and widows, and starting the process to gut and replace the entire kitchen, we were so ready to take a vacation.

So we jumped in our car and drove to Fort Lauderdale for our first Celebrity cruise since the pandemic had started. Four of our planned cruises on Celebrity had been cancelled due to Covid. So it was time to get back to Luminae (suites’ restaurant) and start sailing again.

We were fortunate that we were able to drive. A major storm hit Florida Saturday which ended up cancelling 3,500 flights across the US. Unfortunately, many people were not able to get to Fort Lauderdale before the ship sailed and their vacation dreams were shattered.

But new our adventures have begun. I’m back to regularly writing about travel and look forward to talking with you as you start getting back to traveling and exploring the world.