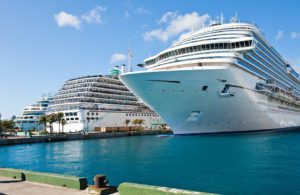 The cruise industry is rapidly recovering from nearly two years of Covid travel closures and restrictions. This doesn’t mean smooth sailing yet, but it does point to a strong recovery for the industry.

Royal Caribbean experienced two record sale days during end of March and early April, when it achieved the highest number of bookings in a single day, as well the highest booking volume in a single week.  In another positive sign for the industry, during the 1st quarter of 2022, Royal Caribbean’s ships held 1.5 million passengers.

Ruther, Carnival Cruise Line had its busiest booking week ever during the same end of March – early April period. And in a similar vein, Oceania sold out its 2024 Around the World 180-day cruise in a record single day.

Meanwhile, Virgin Voyages reported on CNBC, “We have seen bookings that have skyrocketed up 120% since January.”