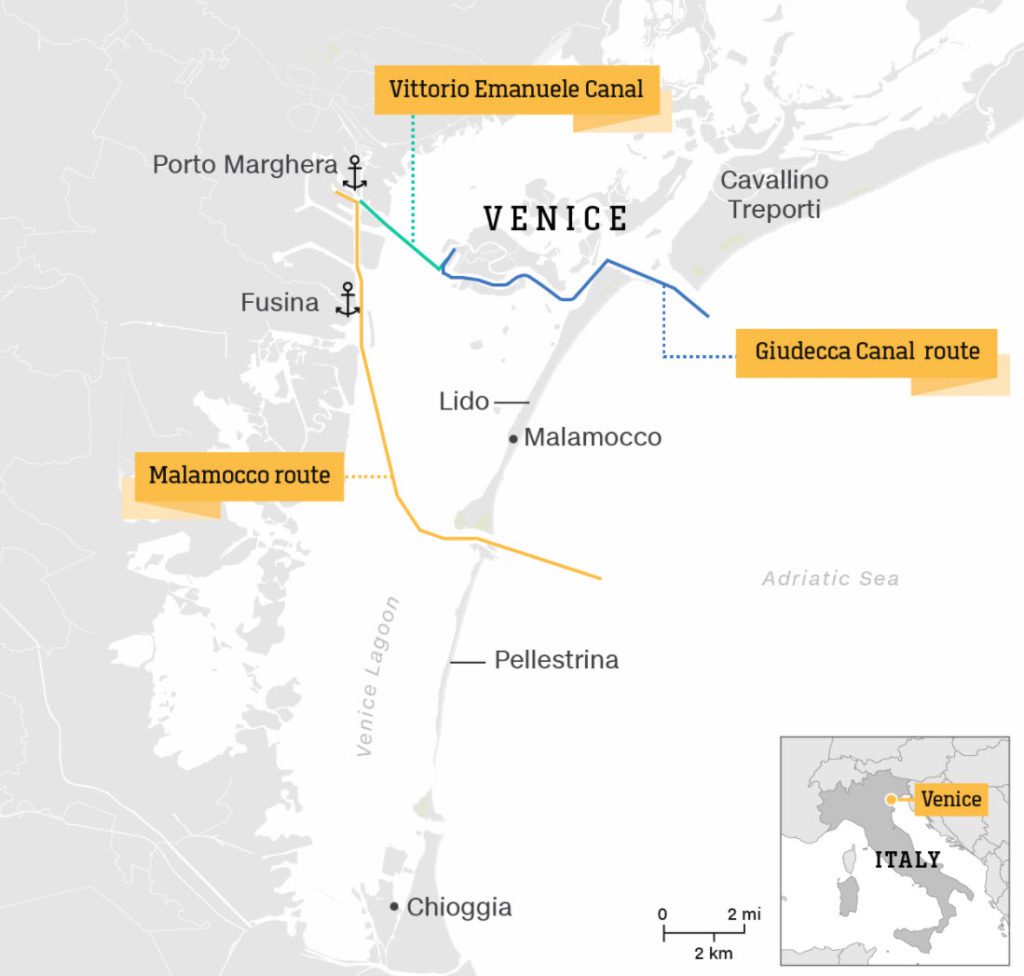 After years of protests and discussion, the Italian government has issued its bans on cruise ships sailing through Venice’s Giudecca Canal. These ships dwarf the ancient city and create waves that erode underwater walls & undermine the supports holding up the city.

Cruise ships have long been sailing through Venice on the Giudecca Canal passing St Marks Square and several historic cathedrals.

Starting August 1, 2021, cruise ships will be banned from using the Guidecca Canal. Instead they will traverse a southern lagoon and dock near the mainland at the port of Marghera, an industrial port, as a temporary solution until a permanent solution can be built – inside or outside the lagoon.

Cruise lines move out of Venice

The lack of any clear permanent solution has frustrated everyone – locals and cruise lines. Royal Caribbean has announced it is leaving Venice and moving to Ravenna about 2.5 hours south. Costa Cruise Line has announced its move to Trieste, also about 2 hours from Venice.

The objection to large cruise ships is multifold. Some object to the size of the ships which overwhelms the city and they view it as incompatible and a detraction from the beauty of the ancient city.

Others worry about the environmental impact the ships have. They displace a large amount of water which generates waves that erodes the shores and marshes, undermines the supports of the historic buildings surrounding the lagoon, and erodes the mortar of the stone borders of the canal.

The new law will protect the “environmental, artistic and cultural heritage of Venice,” according to an Italian government statement.

The law bans ships weighing more than 25,000 tons, longer than 590 feet or which would lead to increased pollution  or overwhelm Venice’s marine environment. Almost all cruise ships are way over they 25,000 ton limit.

Cruise ships account for only 3% of the city’s gross domestic product and about 4,000 jobs, but are a major contributor to the overcrowding of this small city during peak tourism seasons. Many locals welcomed the ban and hope for a better balance between city life and tourism. 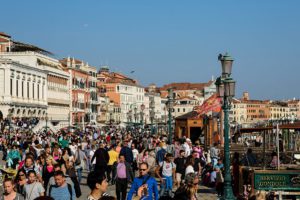 Venice is packed with tourist even in October