EU airlines are going green or at least greener

Previous Next
EU airlines are going green or at least greener 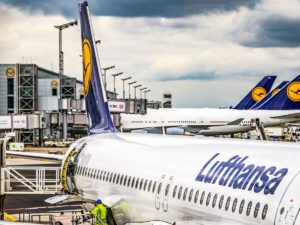 The EU is taking bold steps to reduce greenhouse gases created by the airlines. This is part of the ReFuelEU Aviation Initiative approved by the European Commission (EC) which requires EU-based airlines to use at least 2% of sustainable aviation fuel (SAF) by 2025, 5% by 2030 and then rise to 20% by 2035. Ultimately it would increase to 63% by 2050. In addition, airlines would be require to re-fuel during aircraft turn-arounds in the EU to prevent them from avoiding re-fueling at airports with SAF.

The airlines state SAF can reduce emissions by 80% comparted to regular jet fuel. However, IATA (airlines trade group) said, “The mandated use of SAF must not allow energy companies to engage in uncompetitive practices with the resulting high costs being borne by airlines and passengers.” The plan does include a variety of incentives and measures to encourage the development of more technology and expand the needed infrastructure to support the initiative.

The mandate is on the fuel supplier, not the airlines, so all flights departing the EU will covered.

The initiative seeks to reduce net greenhouse gas emission by at least 55% by 2030. The Initiative must still be approved by the European Parliament to become law.

Travel is my passion and that is why I love to share my knowledge and expertise with others. What better way is there to see and experience the wonders the world has to offer, to meet people from different cultures, to walk on paths first traveled thousands of years ago, or to see how civilizations built their cities and how they live today. Or maybe, you just want to kick back and relax. Through my years in travel, I've learned how to help my clients avoid vacation disappointments. My experiences in 36 countries allow me to sort reality from advertising. With extensive travel industry training, I am a certified Signature Travel Expert. Through the Signature Travel Network, my clients have access to our network of preferred and vetted partners including luxury hotels, resorts, cruises and tour operators around the globe. We have 90 Destination Specialist partners living in over 100 countries. Our "Sophisticated Travel Collection" hotels offer exclusive benefits and complimentary amenities including breakfast for two daily, room upgrades, spa credit and early/late check-in/out when available. Through our consultation program we listen to what excites you and learning about your interests, together we'll craft your perfect vacation. I’m with you in the beginning, through the planning process and until you return home because I want your experiences to be memorable, as mine have been for me.
Page load link
Go to Top