Malta, Valletta and the Knights of Malta

Previous Next
Malta, Valletta and the Knights of Malta 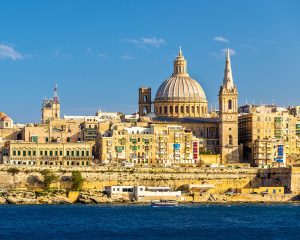 Malta isn’t on most travelers’ radar, but it should be. This small island nation in the Mediterranean Sea, located south of Italy and north of Africa, is rich in history that dates back to prehistoric times and has been ruled by various civilizations over the centuries, including the Phoenicians, Romans, Arabs, Normans, and the British.

During our visit, we were especially intrigued to learn about the Knights of the Templar, also known as the Poor Knights of Christ. They were a medieval Christian military order that was founded in the 12th century. The order was initially formed to protect Christian pilgrims traveling to the Holy Land, but over time it grew in power and wealth, becoming one of the most influential and secretive organizations of the Middle Ages.

The Templars, as they were commonly referred to, were known for their distinctive white mantles adorned with a red cross, which became a symbol of the order. They were also recognized for their great wealth and power, which they acquired through donations from European nobility and their own business ventures. 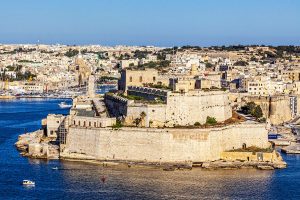 One of the most interesting chapters of the Templars’ history is their time in Malta. In the early 14th century, the order was given the island of Malta by the King of Sicily, as a reward for their services during the Crusades. The Templars quickly set about fortifying the island and building a new capital city, Birgu, which became their base of operations in the Mediterranean.

The Templars’ time in Malta was a period of great prosperity for the island. They brought new technologies and techniques for farming, fishing, and shipbuilding, which greatly improved the island’s economy. They also constructed many impressive fortifications, including the famous Fort St. Angelo, which still stands today as a testament to their architectural skills.

However, the Templars’ time in Malta was not without conflict. The island was strategically important, and it was constantly under threat from pirates and invading armies. The Templars fought bravely to defend Malta, and they were able to repel several attacks, but eventually, they were forced to surrender to the invading army of the Aragonese King, Martin the Younger in 1311.

Despite their defeat, the Templars’ legacy in Malta lives on. Many of the truly amazing buildings and fortifications that they constructed still stand today, and they are popular tourist attractions. The island is also home to several museums and historic sites dedicated to the Templars, including the Birgu Heritage Centre.

The Knights Templar brought prosperity and development, and their fortifications and architectural achievements are still visible today. Although their order was disbanded by Pope Clement V in 1312, their legacy lives on and their story continues to fascinate people around the world. 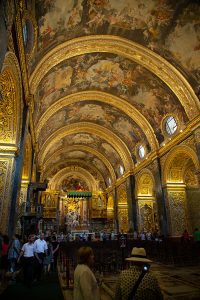 One of the most striking features of the church is its ornate vaulted ceiling, which is adorned with gold leaf and intricate stone carvings. The most famous work of art in the co-cathedral is the “Beheading of St. John the Baptist” painting by Caravaggio, which is located in the oratory. The cathedral also has several chapels, including the Chapel of the French Langue, which contains works by other famous artists of the period such as Mattia Preti and Stefano Erardi.

The sacristy of the co-cathedral is also worth mentioning, it is considered as one of the finest examples of Baroque art in Malta. It is adorned with frescoes and paintings by Calabrian artist, Stefano Erardi, who was a member of the Order and responsible for many of the chapels in the Cathedral. The entire marble floor is a series of tombs housing 400 Knights and Officers of the order. 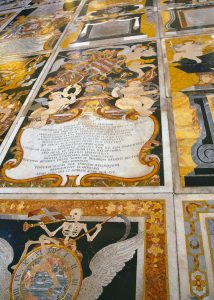 The Wooden Balconies of Valletta

As you walk the streets of Valletta, you can’t help but notice the colorfully painted balconies standing out against the sandstone buildings. Their origins are debated.  Some speculate they are part of the Arab culture that allowed women to view the street but remain hidden from view. Other note that the Knights ordered that homes have adornments. Many of the older balconies have elaborate ornate supporting pillars. 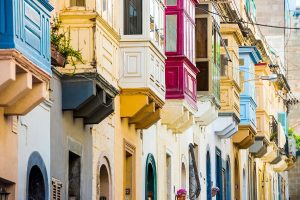 July through August is the peak tourist season in Malta, and it can be very hot and humid during those peak summer months. Late fall and early spring have more comfortable temperatures for exploring the country and city of Vallarta, and fewer tourists.

Because of its southern geographical location, Malta has about 2 hours of additional daylight during winter months than London or Warsaw, Poland, which allows visitors to enjoy the evenings outdoors.

One of the most interesting historical sites to visit in Malta is the Megalithic Temples of Malta, which are some of the oldest freestanding structures in the world. These temples were built between 3600 and 2500 BC, and are believed to have been used for religious or ceremonial purposes. The most famous of these temples is the Temple of Hagar Qim, which features impressive stone carvings and is located on a hilltop with stunning views of the surrounding landscape.

Another must-see historical site is the ancient city of Mdina, also known as the “silent city.” This fortified city was the capital of Malta during the Arab and Norman periods, and is now a UNESCO World Heritage site. Visitors can explore the narrow streets, ancient churches, and impressive palaces that still stand in the city today.

Valletta is the capital of Malta and also a UNESCO World Heritage site. The city was built by the Knights of St. John in the 16th century and is known for its impressive architecture, including St. John’s Co-Cathedral, which is adorned with stunning baroque frescoes. The city also has many museums, such as the National Museum of Fine Arts, and the Malta Experience, which provides an interactive history of Malta’s past.

For those interested in military history, the Malta at War Museum is a must-see. The museum covers the island’s history during World War II and features interactive exhibits, artifacts, and personal accounts from Malta’s residents during the war.

For more recent history, the Malta Aviation Museum provides a unique perspective on the island’s role in World War II. The museum features a collection of aircraft, such as Spitfire fighters, and interactive exhibits that detail Malta’s role in the war.

For adults looking for a more relaxed experience, Malta offers many options for relaxation and recreation. The Blue Lagoon, located on the island of Comino, is a popular spot for swimming, sunbathing, and snorkeling. The crystal clear water and stunning scenery make it the perfect place to unwind.

Another popular spot for relaxation is the Marsaxlokk fishing village, located on the southern coast of Malta. Visitors can stroll along the picturesque waterfront, sample fresh seafood at one of the local restaurants, or browse the markets for traditional Maltese crafts and souvenirs.

For the more active, Malta offers many options for outdoor activities such as hiking, rock climbing, and diving. The island’s rugged terrain and clear waters provide the perfect setting for these activities. The Blue Grotto, located on the south coast of Malta, is a popular spot for diving and snorkeling and is home to a wide variety of marine life. And for those looking for relaxation and recreation, Malta’s beaches and outdoor activities provide the perfect opportunity to unwind and enjoy the Mediterranean sun.