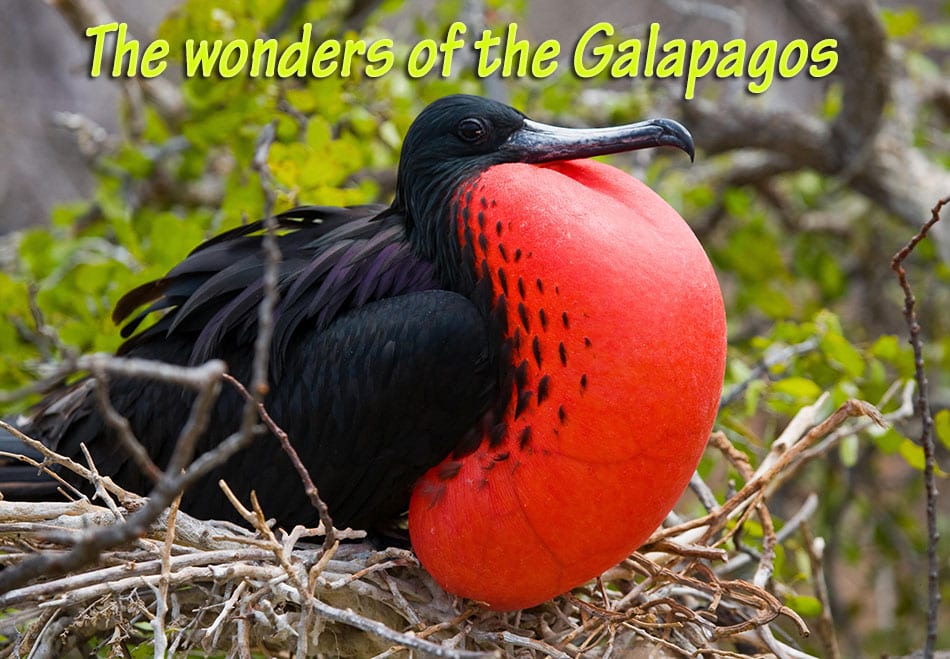 Celebrity Cruises and Silversea Cruises have upped the ante for luxury cruises through the Galapagos Islands. Silversea will launch its luxury 100-passenger Silver Origin in summer of 2020. Silversea cruises start with two days in Quito, the capital of Ecuador, and include airfare to and from the Galapagos Islands. ​Celebrity Cruises is launching the Celebrity Flora, a 100-passenger luxury exploration ship in June 2019. All cruises are seven night itineraries with 10, 11 or 15 night all-inclusive packages including pre/post cruise nights in Quito or Peru/Machu Picchu. (Both Celebrity Cruises and Silversea Cruises are owned by Royal Caribbean.)

​The Flora is the smallest ship Celebrity has ever built and has a modern yacht look and feel. It features two restaurants, two lounges, a pool, and two 1,300 square-foot penthouse suites – every room is a suite.

The Silversea Origin takes luxury exploration ships to the next level. Guests are led on expeditions by staff certified by the National Park of the Galapagos. The Silversea Origin will have the highest Zodiac-to-guest ratio at 1:12.5. The interior design of Silver Origin will whisper luxury, inspired by the understated Italian elegance that pervades Silversea’s fleet of intimate ships. Yet, it will also take influence from the Galapagos’ unique natural environment to strengthen guests’ engagement with the destination, with each space enhancing the experience. Bright, colorful motifs and regional materials will accentuate the design.

WHY VISIT THE GALAPAGOS ISLANDS?

​The Galapagos Islands are truly spectacular. The islands were discovered in 1535 by Spanish sailors. If you love nature and animals, you’ll be as awestruck as Charles Darwin was when he first visited the islands in 1835. About 80% of land birds, 97% of reptiles and land mammals, and more than 30% of plants are endemic or unique to the Galapagos Islands – you can’t see these anywhere else. To protect these species, in 1959 the Ecuadoran government declared the Galapagos Islands a national park.

​​Much of the islands are unspoiled and is as Charles Darwin experienced them in 1835. The islands have dense forests, soaring rock cliffs, volcanic lava tubes, and white sand beaches filled with turtles, sea lions, and iguanas with trails lined with birds many of which can only be seen in the Galapagos.
Giant Tortoises of the Galapagos. 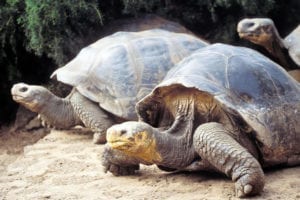 On Santa Cruz island you’ll see the famous giant tortoises, which can exceed 5 feet in length, weigh up to 500 pounds, and have a lifespan averaging over 100 years. Today there are only 10 species left, down from the 15 that Darwin observed. Their slow metabolism and ability to store large amounts of water mean they can survive up to one year without food or water. The Archipelago was named for the islands abundance of tortoises, with the old Spanish word for tortoise being “galápago.” In January or February you might see black turtles laying their eggs in the white sand beaches, and in April or May you might see the hatch-lings make their way to the sea.

Marine Iguanas are only found in the Galapagos Islands

​Other natural inhabitants of the island include marine iguanas, Sally Lightfoot crabs, and finches. Marine iguanas can be found throughout the Galapagos but are the only marine lizard species in the world. They are herbivores and eat marine algae along the rocky shores. They can dive more than 65 feet deep and stay submerged for up to 30 minutes, but typically only stay underwater for a few minutes. While they are marine animals, you’ll typically find them warming themselves in the sun. 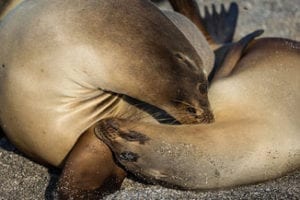 I don’t know anyone who doesn’t get a warm feeling watching sea lions. San Cristobal offers beaches full of these cute creatures. Don’t get to close because the alpha males are known to be aggressive. Just take some pictures at a safe distance. There are many places to swim and snorkel for a relaxing afternoon. 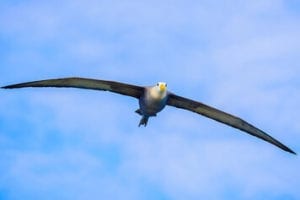 ​Next head to Espanola Island, the oldest of the islands which is full of wildlife. There you’ll find most of the waved albatross in the world. This island is where they breed and most live their entire life, although some will travel to the continental shelf of Peru. While they measure only 30 – 35 inches in length, their wingspan is 7.2 – 8.2 feet. The waved albatross are incredible flyers with the ability to fly for hours, but their unique design makes them awkward or clumsy looking on land. Because of their large wingspan and aerodynamics, they have trouble landing and taking off. While on the island, take a walk up a cliff-side path to see natural lava fissures spewing water like a geyser. 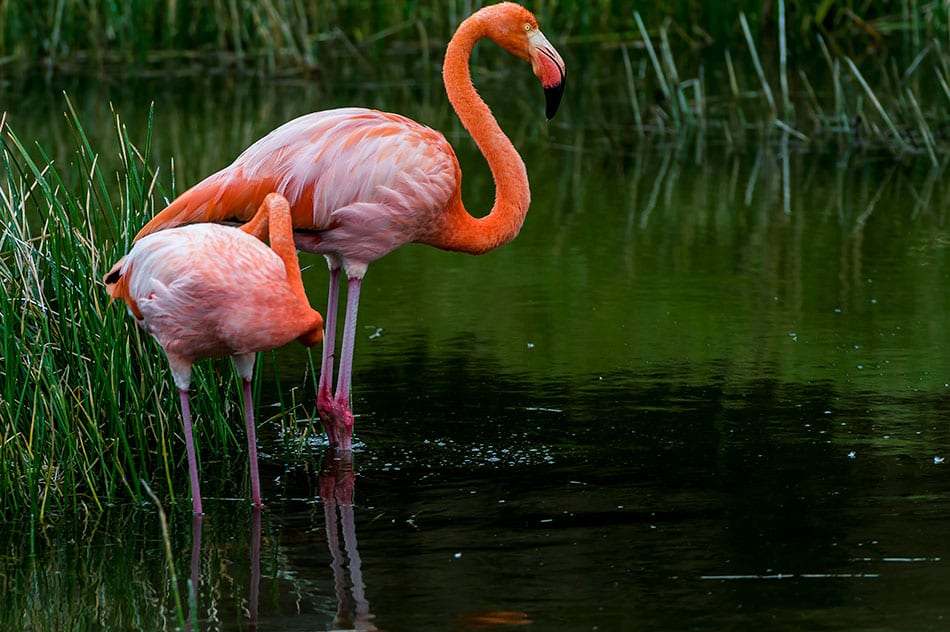 At Floreana you’ll find a lagoon filled with pink flamingos, green turtles, stilts, and white-cheeked pintail ducks, playing on green-tinted sand caused by its olivine crystals. It is also home to the endemic medium tree finch which is only found on this island. 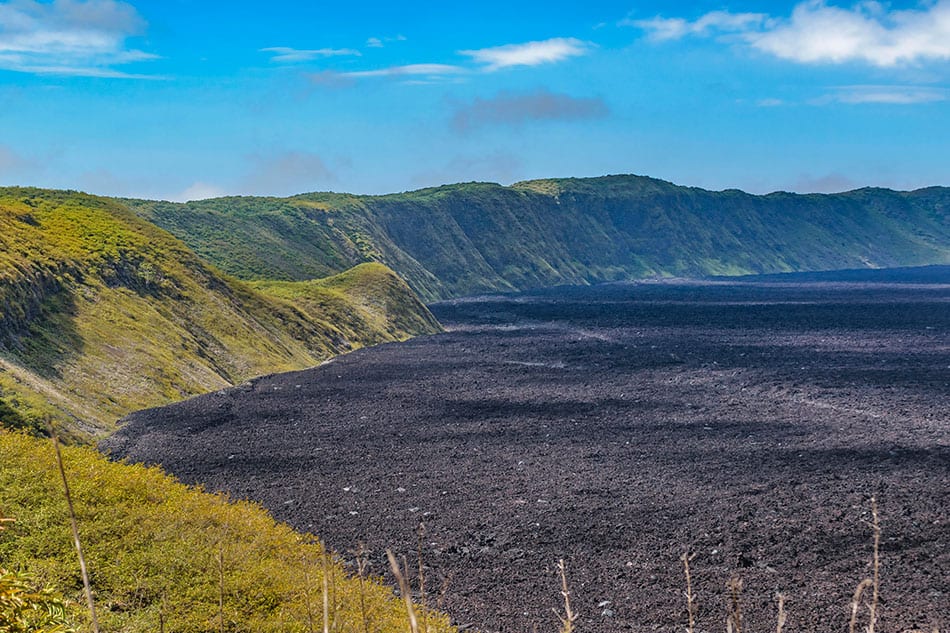 The Sierra Negra Volcano stands 4,500 feet high over Isabela Island with a 6-plus mile wide caldera. The crater is the second largest on earth. Isabella is also known for its Galapagos penguins.

​While many visit the Galapagos to see the wildlife, others go to explore the sea. The location of the Galapagos on the Equator means it receives the warm California current from the north and the cool Peru or Humboldt current from the south. This mixing of the two currents brings the rich nutrients that stimulate phytoplankton that fills its waters and feeds its rich marine life 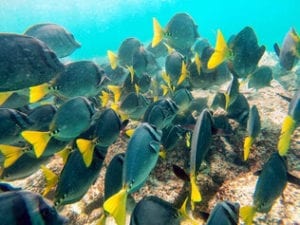 Snorkeling or scuba diving opens you to this magical underwater world full of sea turtles, rays, sharks and a multitude of colorful tropical fish. Scuba diving is more appropriate for advanced divers due to the strong currents and conditions. The islands offer drift dives, deep dives and reef dives, and many have found the islands to be the perfect place to take an open water dive course. The seas contain 28 species of shark, including hammerheads. While diving you’ll be surrounded by massive schools of fish from the hundreds of species drawn there by its current. Some of the more unusual species include the bloody frogfish, rock mover wrasse, Galapagos clingfish, and the Red-lipped batfish which is only found in the Galapagos.
After your cruise on either the Celebrity Flora or Silversea Origin and you’ve completed your visit to the Galapagos Islands, you’ll understand why it is one of the top bucket list trips of many travelers. It offers a unique experience and an opportunity to better understand and appreciate the magnificent world we live in.