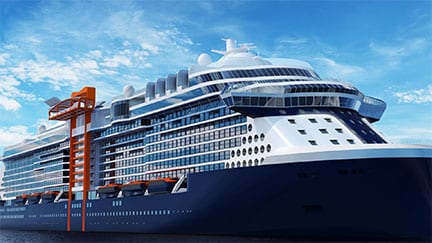 ​Today Celebrity’s newest ship, the Celebrity Edge, sails out of its shipyard in Nazaire, France, and begins its transatlantic voyage to its homeport of Fort Lauderdale (Port Everglades). The ship which as been four years in the making. It is Celebrity’s newest class of ship and holds 2,900 passengers. Three additional Edge-class ships are already on order, and start arriving 2020 – 2022. The Edge’s maiden voyage will set sail on December 9, 2018. 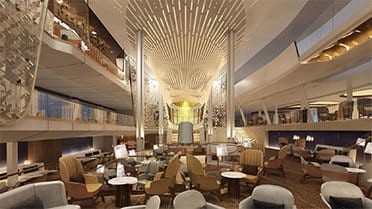 Celebrity’s last new class was the Solstice-class launched in 2008, so the new Edge class will be welcome by many Celebrity loyalist. How will the Edge be different from the Solstice ships? Let’s explore:

What’s New & Different
The Retreat – A new addition to Celebrity is “The Retreat.” Located in the front of the ship on Deck 16, it is sure to be a hit with sophisticated cruisers, The Retreat is a suites-only area with its own pool, bar, lounge area, and Luminae (the fabulous suites-only restaurant featuring a modern, eclectic cuisine created by Celebrity’s Michelin-starred chief).

Theatre – The three-story theatre’s main stage juts well into the seating area creating a theatre-in-the- round experience. Incredibly beautiful backdrops for performances will dazzle audiences from a wall of LED screens and projectors. For those who were mesmerized by the acrobatic on the Solstice shps, the aerial rigging is on the Edge as well.

Main Dining Room (Well its gone, sort of) – The typical cavernous main dining room found in most large ships is gone. In its place are four complimentary smaller theme dining rooms. The Cosmopolitan Restaurant features American cuisine. The Normandie Restaurant pulls from the elegant French Murano specialty restaurant which was launched on the Solstice class ships. The Tuscan Restaurant delivers Italian flavors and pulls from the Tuscan Grill from the Solstice class ships. And the Cyprus Restaurant offers cuisine from the Mediterranean. These restaurants will give sophisticated cruisers more variety in their dining options.

Martini Bar – I must admit, the Martini Bar has always been one of our favorite spots to meet fellow passengers and learn about their experiences. The Edge has given the Martini Bar a more centered and prominent location. No longer shunt to the side, the Martini Bar is featured in the glamorous Grand Plaza under the three-story Chandelier.

Infinity Veranda Staterooms – One of the more intriguing new designs is the Infinity Veranda. A push of a button transforms a typical outside balcony space into interior space thus increasing interior stateroom space as well as providing floor to ceiling glass to view the sea.

Magic Carpet – What will certainly be an attention grabber, the Magic Carpet is a large multi-use exterior elevator (actually it is a cantilevered floating platform) that can travel the 16 stores of the ship. When lowered it will be used as a platform to load and unload newly designed tenders. While at sea and during the evening it becomes another bar or dining area.

These innovative and unique changes will only elevate Celebrity Cruises. We are sure it will only cement Celebrity as our favorite cruise line.