The vineyards and quaint village of Frascati, Italy

Previous Next
The vineyards and quaint village of Frascati, Italy 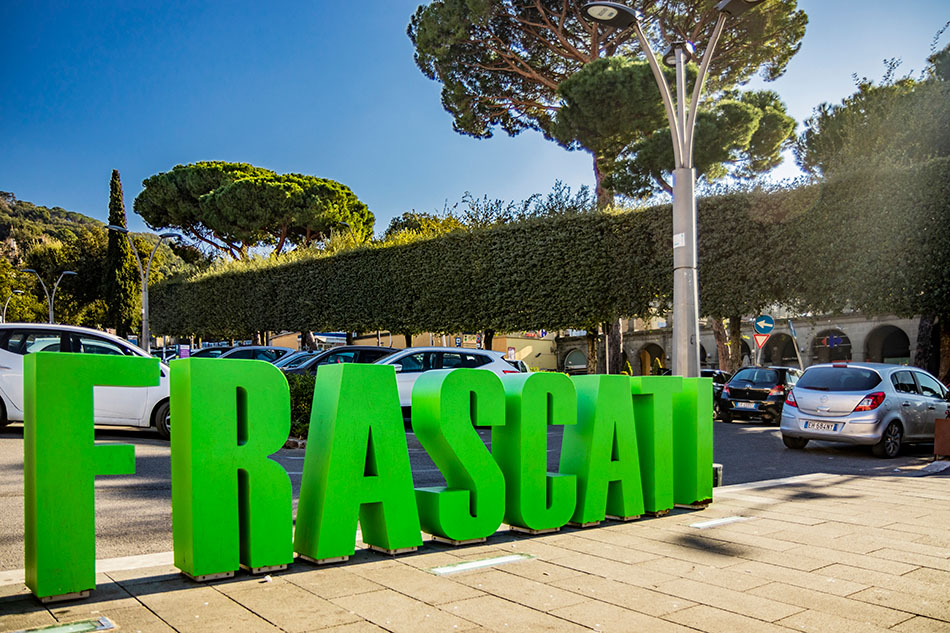 We’ve been to Rome before and explored the ruins of the Roman Forum, the Coliseum, and the Pantheon. This time we wanted to explore further out and see the Roman countryside. We chose a day excursion to Frascati, Italy, nestled in the mountains at the end of the train line.

We started the morning at the Termini train station where we purchased our round-trip train ticket to Frascati. The 12-mile trip lasted about 30-minutes as we travel through Rome and started the long but steady climb to the Frascati train station. 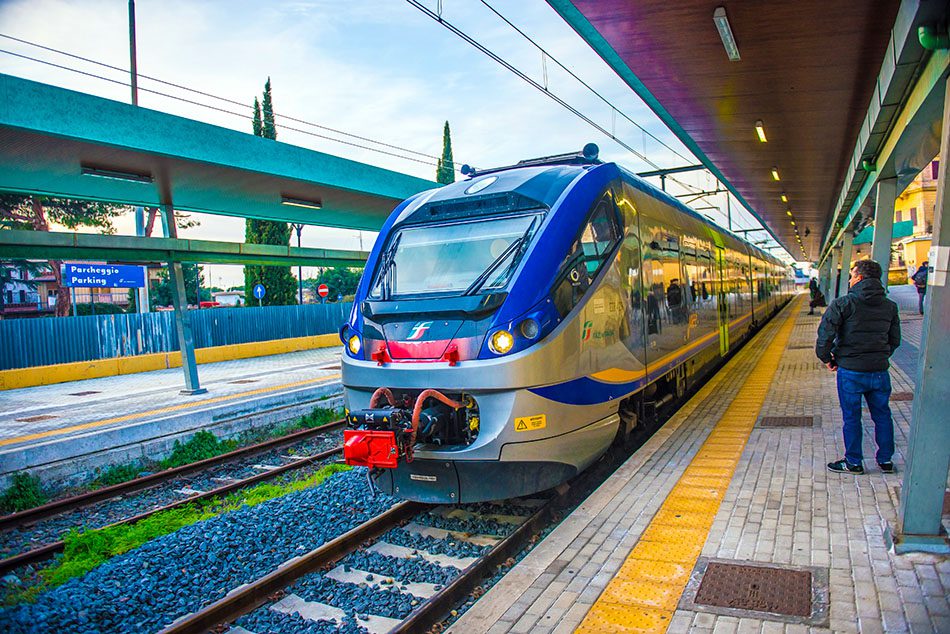 There we were met by our drivers who took us to the Ceccarelli family vineyard. We were met by Paola. She is the 7th generation working this family vineyard. These mountains were created by volcanic activity millions of years ago and their fertile soil is perfect for growing grapes.
Paola told us that most of the grapes grown during the Roman Empire were white. The Romans preferred white wine for its sweetness, as sugar was only for the wealthy. Today, the region still primarily grows white grapes. 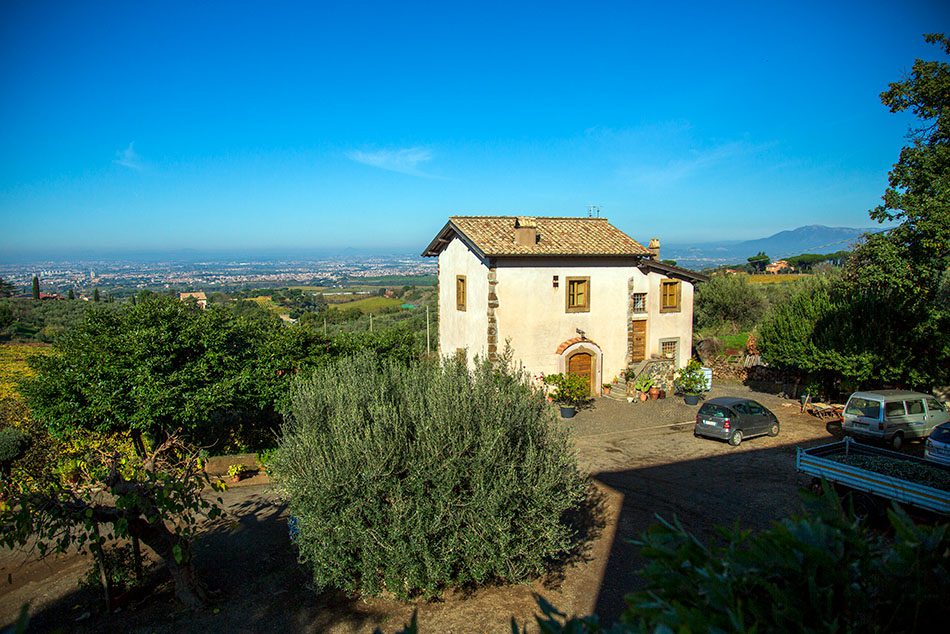 The Ceccarelli family brought the concept of raised vines supported by wires to this area. This allowed more air to flow around the grapes. The raised vines prevented mildew and rot which was caused by the moist mountain air and had been a serious problem. 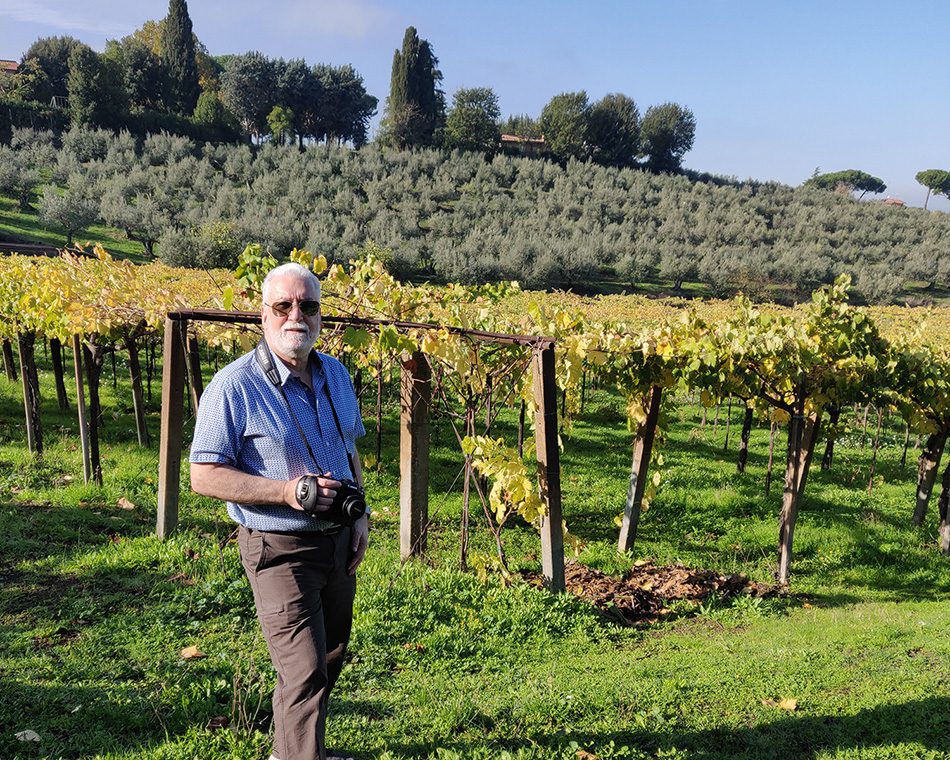 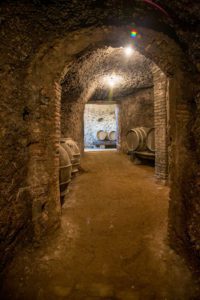 For centuries, the Ceccarelli family sold grapes in bulk to other winemakers. In 2010, they created their own label, Antiche Terre Tuscolane. Its popular Frascati Superiore white wine pays homage to its past by featuring a drawing of the original farmhouse on its label.

After touring the cellars, we all gathered around two tables where we were served fresh bread baked that morning and olive oil that was recently pressed. Paolo explained the first pressings of olive oil are highly sought after. The flavor is at its peak, and its purity and quality are at their highest. And boy did it live up to that high billing. 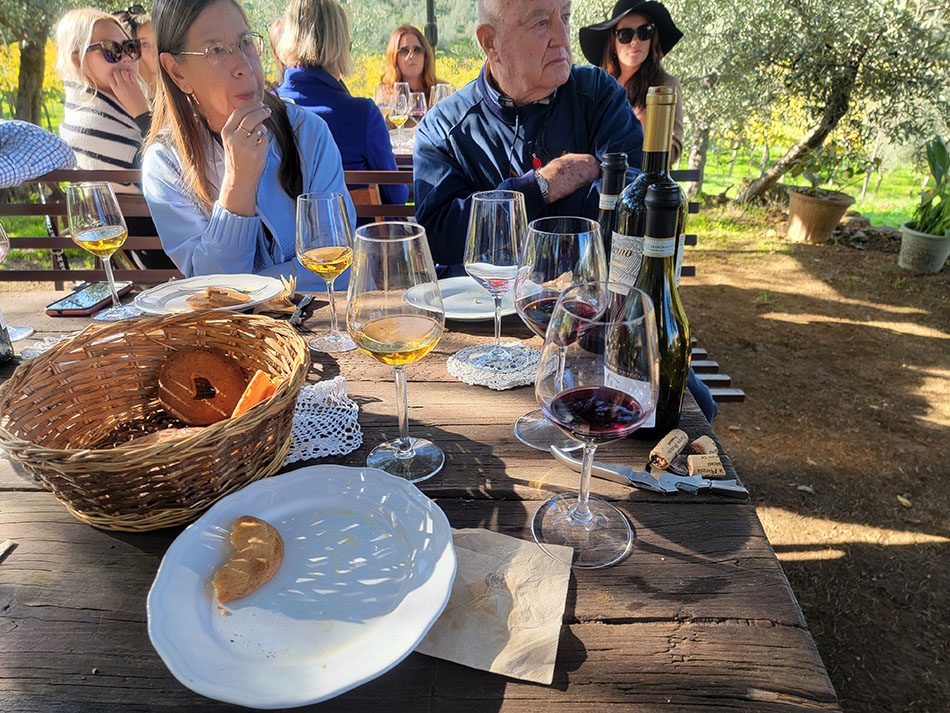 With the olive oil and bread, we were served the vineyard’s own white wine – Frascati Superiore. It was a light and sweet white wine, with a yellow-golden color and scents of apricot, chamomile, and golden apple. It was delicious. I normally don’t drink wines because I have an allergic reaction to them. However, that didn’t happen with this wine, so I had several glasses and would have had even more. With the wine, Paola brought out locally made wine biscuits. Yes, the tradition of these biscuits are to be paired with local white wine. This recipe dates back for centuries. The cookies follow a simple (affordable) recipe and then are baked in a wood-fired oven. I could eat boxes of these, and in fact, I’ve since ordered a few dozen and had them shipped to me. The white wine was followed by a red wine from a neighboring vineyard.

During these tastings, we had time to meet all the other people in the group, and share our stories and our own adventures. It made for a very enjoyable time. New friends, new conversations, wonderful wines, and some sweets to go along with it all. 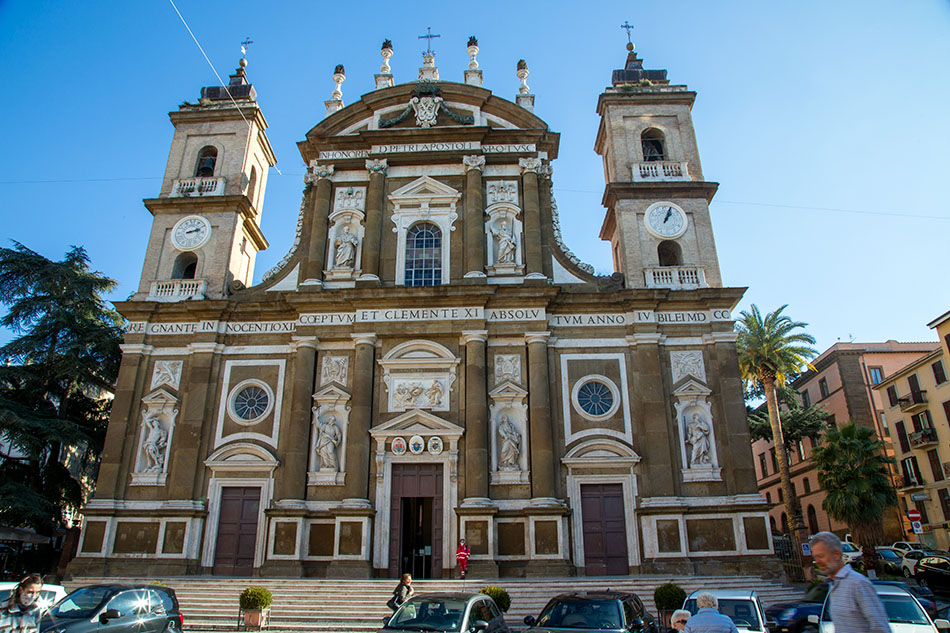 From there, we were off to tour Frascati. The early settlers probably arrived in the area around 200 BC. It was a favorite refuge from the oppressive summer heat in Rome. (Note – summer is not a good time to visit Rome. Go in late autumn or the spring.) The town endured centuries of wars and raids. During World War II, Frascati was heavily bombed with around half of its buildings destroyed because it housed the German General Headquarters for the Mediterranean area. 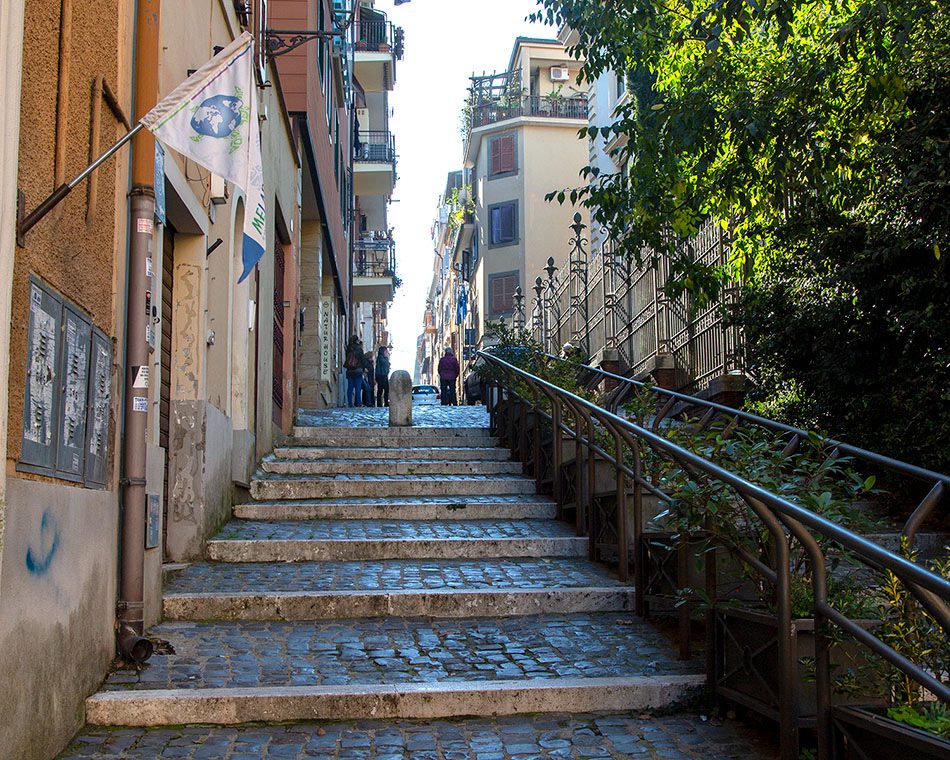 The village of Frascati

The town itself is quaint, with narrow roads winding through the village. We passed the fountain in Piazza San Pietro with the papal-crossed keys. Next we stopped by El Forno Cerailli. It is one of the last wood-burning ovens in metro-Rome. It was designated an Italian heritage site and given a special permit allowing it to continue to feed its wood ovens. Their bread and pastries have a wonderful smoky flavor. And they made my favorite biscuits that I had with my white wine.

The bakery started as Piazza Bambocci in a building dating back to 1380. The oven was purchased in the 1920s and the same oven is still producing bread, pizzas, and desserts. The oven has been in the family for 4 generations. 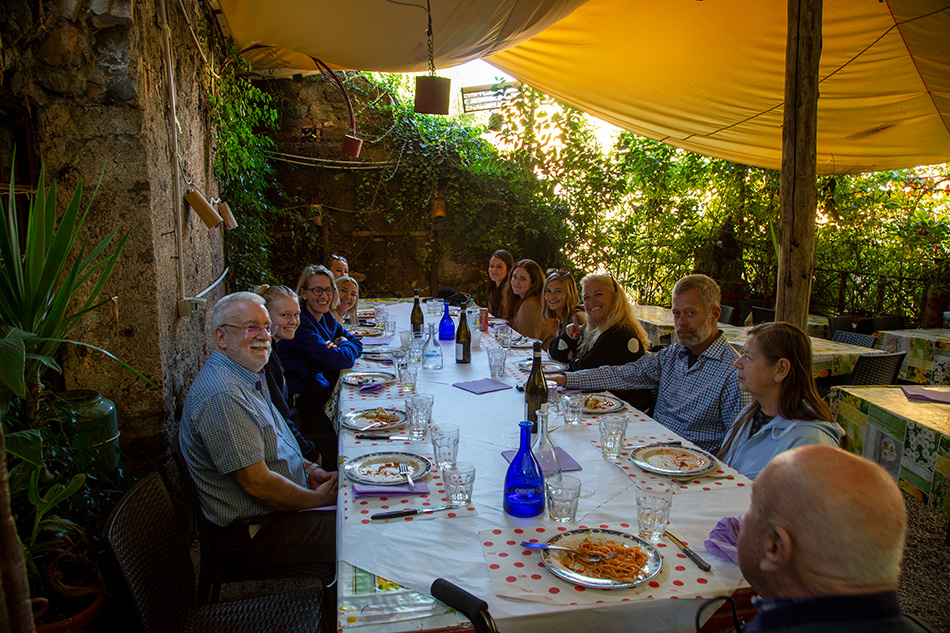 From there we went to enjoy a traditional Italian lunch with more local wine, and conversation with our new friends. After lunch, we walked around the city to appreciate its history and architecture. Then off to the train to take us back to Rome.