The haunting ruins of Pompeii

Previous Next
The haunting ruins of Pompeii

During an Azamara Cruise we had a port stop in Sorrento, Italy, and while Sorrento is a charming old city perched on cliffs overlooking the Mediterranean, we wanted to visit the once thriving ancient city of Pompeii. As you’ll soon learn, it is a visit that everyone should take. 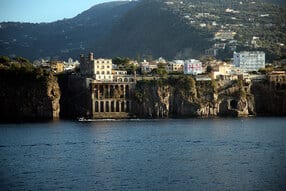 ​I should note that the drive from Sorrento to Pompeii is not for the faint of heart. The road hugs the mountain cliffs with steep vertical drops.

We had expected Pompeii to be a lot like many ruins we have seen before – a few shells of a couple of buildings and small remnants of a past civilization. But that is not the story of Pompeii. Inside we found a city largely intact following the eruption of Mt. Vesuvius in 79 AD. The eruption covered the city in 15 – 20 feet of volcanic ash freezing the city and its residents in time for almost 2,000 years. 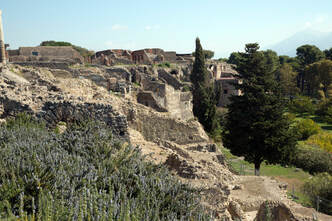 As you walk up to the tourist entrance, the city looks like a rundown fortress built into a hillside. However, once you enter you discover a massive city full of buildings, running water, streets, public baths, theaters and public squares. We were stunned by the size of the city and the amount of structures that survived. While the 20 feet of volcanic ash that rained on the city collapsed almost all of the roofs, the city was largely preserved because the ash formed an airtight chamber encasing buildings, artifacts and nearly 2,000 inhabitants. 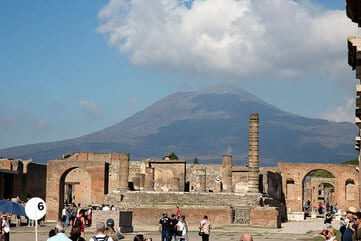 Pompeii with Mount Vesuvius only 5 miles awayAs you enter the city it becomes clear that Pompeii was once a wealthy and vibrant port city. Settled around 74 BC by the Greeks. It was used by Greek and Phoenician sailors as a safe harbor. Once It was incorporated into the Roman empire, it became important passage route to supply goods to Rome. At the time it was destroyed by Vesuvius it had grown to a population of 12,500 – 15,000 inhabitants.
​
Over the decades that followed the eruption, the city of Pompeii was forgotten. There were several limited excavations in the area in the 1700s and 1800s. It took until the 1950s for the full size and scale of Pompeii to be uncovered. 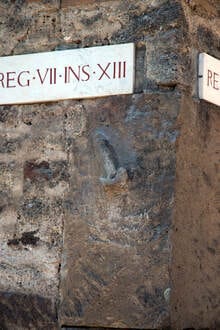 Located about five miles from Mt. Vesuvius, the city bloomed into a sophisticated trading post with elegant houses, amphitheaters, cafes, taverns, brothels, public bathhouses and a large an open-air Forum for shopkeepers and artisan and public gatherings.

​The original street signs look as if there were recently created. Original graffiti abounds throughout the city calling out certain citizens or pushing political agendas – I guess we have not changed that much over time. ​ 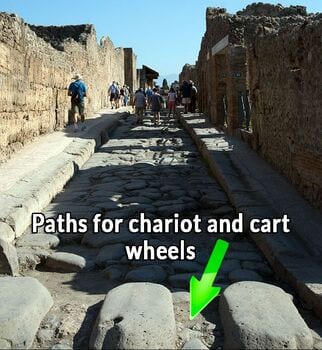 ​​We entered the city near the Stabia gate to an area behind the grand and small theatres. As we walked up a stone road with paths cut for Roman chariots and shopkeeper carts we passed rows of small homes tightly packed together.

​Along this road were several small shops and cafes which served their version of fast food. You can still see the pots and counters used to serve hungry patrons. Their tools of the trade, plates, bowls, cups and cooking utensils can still be found in these buildings.

​The lead pipes were lined with chalky deposits that minimized the effects of lead. But the water was contaminated with antimony which was added to the lead to make the pipes stronger. Antimony is much more toxic than lead. These original pipes can still be seen in the city today. 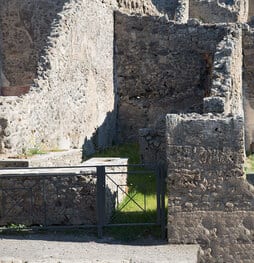 Bakery inside of a home

​Merchants tended to work in their tightly packed modest homes which were built around their workshops. While cafe owners would build counters and ovens in the front of their homes to serve people walking on the streets.

Some citizens owned small plots of fertile land outside of town and would sell their crops from their home storefront. 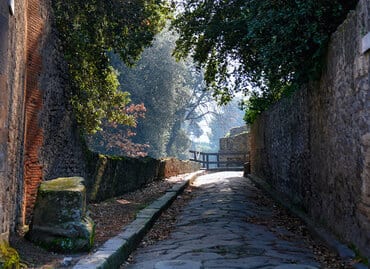 As we continued our climb up the hill, we entered the more affluent section of the city with its larger homes and villas. You can’t help but imagine what it might have looked like almost 2,000 years ago. Beautiful large villas filled with expensive furniture and adorned with painted murals and lush gardens. During the excavations, many pieces of furniture and art were discovered.

Villa in Pompeii
Artwork and furniture found in Pompeii
These homes belonged to the noble class and were built around a courtyard with no windows to the outside. You’d enter through wood doors into an atrium with a sloping inward roof which would direct rainwater into a basin. A colonnade with a series of rooms surround the courtyard. After the atrium would be the meeting or reception room for the noble man and a dining room. The kitchen and storage rooms were at the back of the house, along with servant quarters.
​Our next stop was the Forum Thermal Baths built 1 BC. It is divided into separate areas reserved for men and another for women. Each was then divided into four large areas: a changing room, a cold bath, a warm bath, and finally a hot bath. In addition there were latrines for men and women. The heating system for the baths was rather ingenious and consisted of a series of pipes running through cavities in the walls. The various rooms were decorated, although the men’s rooms contained the most elaborate decorations and furnishing. These baths and the others built in the city served the entire city’s population. Only the richest and most well-to-do could afford their own private baths. So the baths served a social function as a place to meet and talk as well as a place for hygiene. 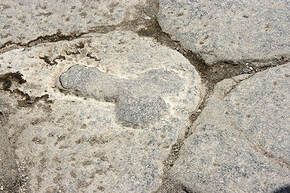 ​Speaking of social outlets, brothels were a normal part of the city life so much so that these stone carvings were placed in public streets and on buildings to direct visitors to brothels. Inside the brothels were pictures on the wall shows what services were available allowing foreign travelers to point to what they wanted.
​Of course the largest social gatherings would be the amphitheatres and the Forum marketplace. The Forum was a large rectangular area (520 feet by 109 feet) surrounded by temples, buildings, houses and porticos. This was the heart of the city where the citizens would meet, conduct business and worship.

The amphitheatre was built 70 BC and is the earliest known amphitheatre to be build of stone (the Colosseum in Rome was built over a century later). It was used for gladiator fights. (Amphitheatre means double theatre or a circular theatre.) It has been estimated that it could hold between 12,000 – 20,000 spectators. After a huge and deadly fight between Pompeiians and residents of Nuceria during a game, Rome ordered a 10-year ban on those contests. 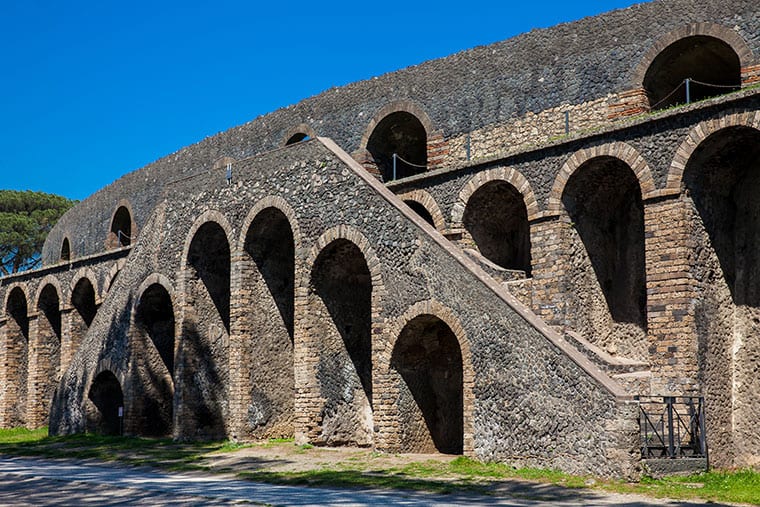 As a wealthy community which attracted wealthy visitors from Rome and other cities, Pompeii had a thriving theatre. The small theatre could hold around 1,000 spectators and was designed in a Greek style with seating area deeply embanked. It was permanently covered. Performances would include plays, musical events, as well as mime performances which were typically comedy or of a bawdy nature.

The large theatre could hold up to 5,000 and could be covered during performances. 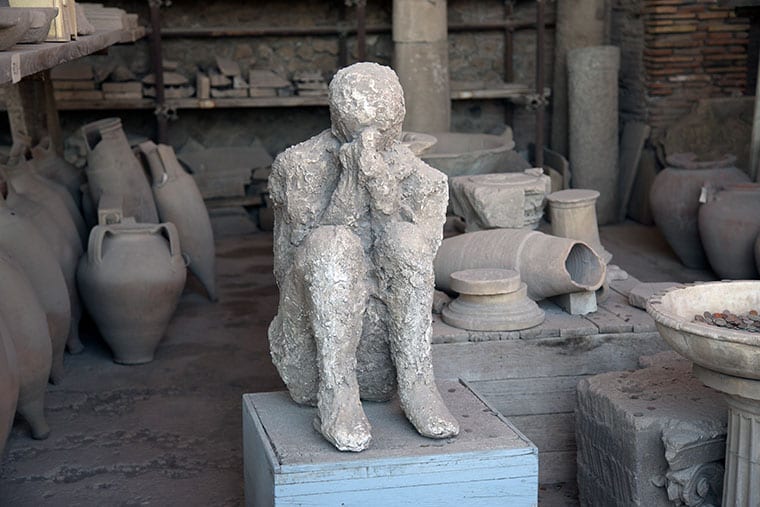 Of course a visit to Pompeii isn’t complete without viewing the horrific casts of those who did not escape the eruption. Their plaster casts show the horror and suffering in their final moments of their life. Roughly 2,000 inhabitants perished this way, along with their pets and animals.

The volcanic ash and pumice settle around their bodies forming a lasting final impression within the surrounding ash. As their clothing and bodies decayed over the years, all that was left was their bones and the void inside the cast that was their body. Researchers discovered they could fill the voids with plaster and create realistic replicas of the bodies. Most of the bodies are assumed to be servants who were forced to stay in the residences by their masters.

You can easily spend a full day exploring this incredible city. We took a shore excursion and only had about two hours in the city. We both agreed that next time, we’d arrange our own visit and spend much more time.  You can take an audio self-guided tour which allows you to take your time at each site.

If it isn’t already on your bucket list, be sure to add it – you won’t be disappointed.